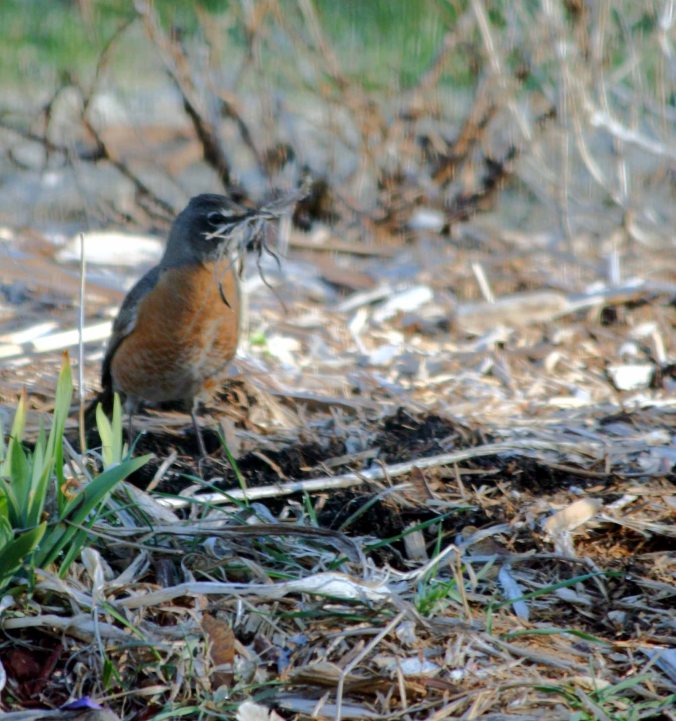 Isn't it curious it's the male you often see gathering materials for a nest? I wonder, is the female at work building it, too? And, is the male's partner already bound to him – by whatever method they use – and expecting his egg when he's building the nest, or does he build the nest assuming he'll find a mate and have his own bachelor pad to bring her back to?

I was watching this particular bird this morning, when I should have been getting ready to come to work – but that's a different topic. He flew down into our mulch in the flower bed, grabbed a beakful of material, then flew up into our crabapple tree. After hopping around a while he seemed to find the proper place to start building, and he put down the sticks/grass. More than half of it fell right out of the tree (darn gravity), but he seemed undeterred because back to the mulch he went.

I guess it's no more futile than a lot of things humans do, come to think of it.

A funny story from a few years back, we used to put hanging flower baskets on our porch early in the spring. Every year a tiny brown bird would build a nest in one of them, lay eggs, and shortly thereafter we'd see the little darlings with necks outstretched, waiting for food. Without fail, a bird would show up a day or so after we hung the baskets, immediately starting to build. Then, one year, we were late putting them out. One day I heard a tap, tap, tap coming from the living room. And there, outside the window, was a little brown bird using its beak to tap on the glass. Was that a fluke, or was it actually saying to us, "Put out the damn baskets, already!" After that year we were so late we never saw, or heard from, those birds again. But it makes you wonder, doesn't it?

Then there was the winter a family of skunks grabbed our Christmas lights from the railing and dragged them under the front porch. I still picture little skunks grouped around a tiny Christmas tree, singing skunkish versions of carols and exchanging gifts. Whatever skunks give I imagine it's not perfume.

Maybe I should get out of the house more.