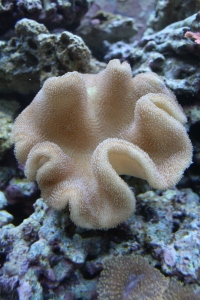 Meet the new arrival in the family. It was adopted yesterday. It's called a leather something or other, and it's a fairly large coral. Paul would know, but I can't ask him right now. He's gone to look at a selection of corals someone is selling, a local guy who has an eBay store and said, "Come on over! We have more selection than any fish store." Beats paying the $ 45 shipping charge for the special boxes designed to keep the corals warm.

I expect when Paul returns – hopefully today - his arms will be filled with plastic bags bearing yet more sea creatures. In fact, I'd bet my life on it. My daughter went along with him, just for the ride I suppose as her interest in fish and corals is somewhat limited. I told her to make sure her father doesn't buy too much. She gave me her, "Yeah, RIGHT" look. 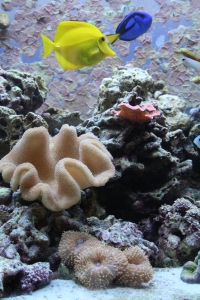 I don't know where he'll put the new additions, since you have to be careful where you place corals. The more aggressive ones put out poison tentacles to kill others within range, protecting their territory to allow for new growth. Some are more aggressive than others, but he'll know what can be safely placed where. He does his homework.

It's already getting crowded in there. You can't even see all the corals in this photo. But trust me, they're there. Lovely to look at, though, isn't it? Aside from the TV, it's the focal point of the room. More so than even the fireplace, which usually languishes unused.

Now Paul's talking about "my next tank will have …" Saints preserve us. I've mentioned before how much time he spends tending this one. If he has his way and sets up another we'll only see him on holidays. The children will ask, "Who's that guy you hired to take care of the fish tanks? He looks familiar, but I can't quite place him"

That's why I'm considering hosting an intervention. As with any addiction, sometimes you have to sit a person down and help him realize he has a problem. The saving grace is the next time I want to attend a book sale he'll have no choice but to give me his blessing. All I'll have to say is FISH TANK and his mouth will clamp shut. Nothing he can really say about that, now, is there?

Whatever he comes home with will pop up on his blog within the next few days. That's as sure as the sun rising in the morning. And his coming home with tons of new corals before the sun sets this evening. In the meantime, I'll bide my time waiting for the next big local book sale.

2 thoughts on “In need of divine intervention.”

2022 signals my last push in regard to my blog. It's been in existence since around 2007 but I've hardly posted on it for years. I pay for the domain. If I'm not going to work out what to do with it, I'll shut it down. If I do keep going, it will need to shift to fit my life.