As I mentioned in an earlier post, Huckleberry Finn is the first book assigned for my multi-cultural literature course. For me – a native of Mississippi – it hardly seems multi-cultural, but I realize not everyone hails from the South. To many, race relations in the pre-Civil War South is a foray into uncharted territory – something they know existed but haven't delved into.

I started my re-read of Huck Finn last evening. It's a much quicker read than I remembered, thank goodness, considering my time is sorely limited. It helps that I don't stumble over the accents of either Huck or Jim, being used to hearing the southern "voice." From reading the negative reviews at Amazon – mostly written by disgruntled teens who were "forced" to read the book for English class – the accents are a common complaint. One parent even commented her poor child couldn't understand what the characters were saying, and questioned why the book had been assigned. Many proclaimed they had to resort to Cliff Notes – which I consider to be cheating used for anything but refreshing on a book already read – rather than trudge through such drivel. Another questioned why Twain was considered a great American writer, because "this book sucked!" Doesn't give me a lot of confidence in the next generation. 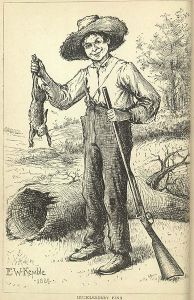 The most moving passage in the book, and a cathartic moment, concerns Huck's moment of personal crisis, finding himself torn between turning Jim in – because he was someone's property, and thus virtually a stolen object – or helping him reach freedom. Given his background – raised as a white child in an era when slaves were ubiquitous – his conflict is understandable. When it came down to it, his ultimate decision was whether Jim was a possession or a human being.

Huck's moment of conscience begins when he muses to himself:

"Jim talked out loud all the time while I was talking to myself.  He was
saying how the first thing he would do when he got to a free State he
would go to saving up money and never spend a single cent, and when he
got enough he would buy his wife, which was owned on a farm close to
where Miss Watson lived; and then they would both work to buy the two
children, and if their master wouldn't sell them, they'd get an
Ab'litionist to go and steal them.

It most froze me to hear such talk.  He wouldn't ever dared to talk such
talk in his life before.  Just see what a difference it made in him the
minute he judged he was about free.  It was according to the old saying,
"Give a nigger an inch and he'll take an ell."  Thinks I, this is what
comes of my not thinking.  Here was this nigger, which I had as good as
helped to run away, coming right out flat-footed and saying he would
steal his children–children that belonged to a man I didn't even know; a
man that hadn't ever done me no harm.

I was sorry to hear Jim say that, it was such a lowering of him.  My
conscience got to stirring me up hotter than ever, until at last I says
to it, "Let up on me–it ain't too late yet–I'll paddle ashore at the
first light and tell."  I felt easy and happy and light as a feather
right off.  All my troubles was gone."

What turns the tide is Jim's humble gratitude toward Huck for all he's done for him, for virtually saving him. Jim expresses such heartfelt thanks that Huck, for perhaps the first time, sees him as more than just a commodity to be bought and sold. He sees him as a human being, separated from his wife and children thanks to a culture that thought nothing of breaking up families, all but guaranteeing they'd never see each other again. When Huck, in a canoe ahead of Jim - who is on their raft -  Huck comes upon a man looking for escaped slaves. The boy's moment of truth arrives:

"I just felt sick.  But I says, I GOT to do it–I can't get OUT of
it.  Right then along comes a skiff with two men in it with guns, and
they stopped and I stopped.  One of them says:

"Well, there's five niggers run off to-night up yonder, above the head of
the bend.  Is your man white or black?"

I didn't answer up prompt.  I tried to, but the words wouldn't come. I
tried for a second or two to brace up and out with it, but I warn't man
enough–hadn't the spunk of a rabbit.  I see I was weakening; so I just
give up trying, and up and says:

And with that Huckleberry Finn commits himself to saving Jim.

This is why Huckleberry Finn is one of the great American novels. It takes a national shame, racism and slavery, and shines a light on its cruelty and injustice. For the first time in an American novel a slave is treated like a human being. Jim becomes more than a possession to be bought and sold. He becomes a human being of the same worth as a white man. This is why Twain's book caused such an uproar upon publication, though later its frequent banning is based on its usage of the slur "nigger," a word common to the time and place in which the book was set. Never used gratuitously, the book wouldn't have been genuine without this reference to the black race. It's used to help illustrate the second-class status of black people, the ease with which whites dismissed them as inhuman, worthy only of being trod on and used.

It feels ironic to be re-reading this book on the heels of the historic election of a black president. It feels good seeing how far we've come as a nation, how color-blind we are becoming as a people. We can only hope that one day it won't be remarked upon that a black man, an Asian-American, a person of any minority is elected to the highest office in the world. Then we'll have reached true enlightenment. It makes me proud knowing we've taken the first step.

2 thoughts on “The journey toward becoming color blind.”