Like everyone else on the planet, I have way too much to do before the holidays. Trying to be industrious, I sat down and started making a list, but I didn't get very far. My lists have the annoying tendency of falling into the wrong hands (re: my children's), mostly because I'm not what you'd call either an organized or careful person.

That's the reason two of my three children came to the conclusion there was no Santa Claus. Misguided me, I made a list in two columns, one with gifts from us, one with gifts from Santa. I tried backtracking, telling them, "Well, those are the gifts I HOPE Santa brings, because we can't afford to buy them." My daughter didn't believe that for one second. I won my son back over, but the girl? Not so much.

Not to panic or anything, but it's getting perilously close to the 11th hour. I have done some shopping, but by no means am I finished. You'd think since I only have my children to shop for it wouldn't be that big of a deal. But I make everything a big deal. (SEE: Drama, Domestic.) If it's worth doing or having, it's worth worrying out of all proportion. That is my motto. One thing I can say in my defense, I ordered a couple of things for the kids online, things I knew would be all but impossible to find in the stores. Now I just have to worry if they'll be delivered on time.

For my daughter's birthday on Wednesday I gave her three gifts I'd originally bought her for Christmas. Now I have to find replacements. Her list was short this year. She wants fewer but somewhat more expensive things – one of them being the new Wii DDR game. Good luck finding that one. We got our Wii last year, but only because we stood outside in the cold for an hour waiting for the store to open, then rushed in like madmen, headed straight for the big prize. That's the one and only time I've done that. I always made fun of parents so desperate for the IT toy of the year they'd be willing to stand outside in sub-freezing weather. But it was worth it for the Wii. That is one cool gaming system. But you know what's ironic? Of all the games my kids put on their lists this year, not one of them is for the Wii. If it wasn't so frustrating I'd laugh. On the plus side, they asked for some Game Cube games, and those play on the Wii. When you're a parent you take solace when and where you can.

Foraging for Christmas Day dinner supplies is number two on the list I've yet to finish. We always have the same breakfast on Christmas: Belgian waffles with strawberries and whipped cream. But Christmas dinner varies. Not that the kids are much in the mood for sitting down, away from all the cool,  new stuff, long enough to eat a formal meal. Regardless, I still make the whole meal.

I didn't grow up with any real traditions, and I feel the lack. I want my children to know tradition and continuity, mostly because I didn't have the chance to know either. So I'm making up my own as I go. Some of them I borrow, like Christmas crackers. I learned about them from my British friends, and found they were for sale here, as well. So, onto the list it went. I thought I liked them much better than my children, until my daughter and I were out shopping last week. I saw the price of crackers was nearly $ 10 (for a package of 10), and at first thought that rather high. Then my daughter piped in with, "But they're tradition! You have to buy them …" So, I did. Knowing she appreciated I always bought them was worth the bit of extravagance. See, that's the advantage of a blank tradition slate. You can fill it any way you please. 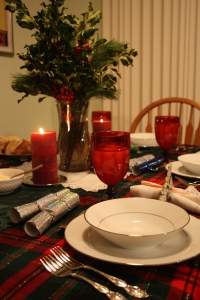 Speaking of tradition, we've had the same holiday tablecloth since we've been married. It's a little too small for our table now, so I bought a bigger white cloth with lacy edges to put underneath, which solves that problem. Aren't I resourceful? When I'm feeling particularly ambitious I put ribbons at the corners (of an oval table, go figure) and stick in bits of greenery from the tree. How Martha Stewart's heart would sing with joy! When I don't do that my daughter actually notices, and remarks on it. Yet another sign my mark is being left in there somewhere.

But the true test will be when she has her own family, and whether anything we're doing here will make it into her traditions. Not that I expect my children will be carbon copies of me. I'd be disappointed if they were, actually. Sound weird? Not really. I don't want my kids to be little clones. I expect them to have minds of their own, and not necessarily be out of their minds, like their mother. If they take some of our traditions I'll be happy to see it, but God help me if I'm ONE OF THOSE MOTHERS IN LAW. You know the kind, the one who's always lording over her kids, telling them what they should be doing. Anything but that, please.

Every year we buy our Christmas meal from Trader Joe's. Unlike traditional supermarkets, they have all sorts of exotic, gourmet food at prices that are amazingly cheap. I don't know how they do it,  but they seem to have a really simple advertising plan. They send out small newsletters in newspaper format. You never see them on TV, and I don't think they advertise on the radio, either. It's more a word of mouth thing. Which would explain why they're so reasonable. They choose to spend their money on great food instead of great slogans.

One thing Trader Joe's has that my kids insist on every Christmas are their sinfully delectable desserts. They have a chocolate cake with chocolate ganache icing that's to roll over and die for. Not to mention their Christmas stollen - the German version of fruitcake - with a marzipan center. It's becoming traditional buying these two cakes. There's that word again.

I guess a lot of things on my list really are pre-determined. Maybe I do worry a little too much. The kids will get enough stuff. They always do. And the dinner meal will pick itself out when we go to the store. We'll buy what looks appealing, knowing everything at Trader Joe's is great. All the time I spend worrying I should just spend watching the lights blink on the Christmas tree. Either that or gluing glitter to something, because I do like glitter. It's cheap, but it's also reflective, and I like that. Maybe if I did more things like that I'd be less grumbly when this time of year rolls around.

It's just that … How do I say it? I like worrying everything to death. After all, if no one worries what would we have? Mass chaos! That's what!

Worry, for me, is another tradition. I'd love to be enlightened, walking around with a half-smile on my face because I know all the answers to life's questions and you don't. Don't get me wrong; I love feeling superior. It's just that there's too much to do at this time of year, too much that can go wrong, too much to be forgotten and too much potential for disaster. Or, that's how I see it. Maybe that's because I always took care of everything, always worried about everything. And it was just too much. I'm tired of that. I'm working toward minimizing the holiday, cutting out all but the necessities because I'd like to get a little enjoyment out of it, too. It's time I stopped worrying about perfection, about doing everything, and allow myself to make a few mistakes and forget a few things. To not worry about anyone else's expectations.

I think that's a pretty important tradition to pass along, too. If not one of the most important life lessons.

Now I'm going to stare at the tree, not making a single list. At least 'til tomorrow. Baby steps …

One thought on “Traditionally anything but traditional.”

Skim reading back over the first few pages of this book to figure out how she did what she did, why it's such a riveting book.