… say it in a loud, forceful voice so more people hear. 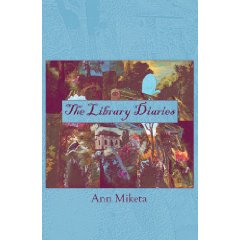 The Library Diaries by Ann Miketa

Following is my Amazon review, short but (not so) sweet:

Excrutiatingly badly written prose plus very mean-spirited accounts of patrons, thinly disguised by changing their names, and, ultimately bad taste all around. An almost-librarian myself, I can identify with all the other reviews complaining this book is a blight on the profession. The intent of the author was to tell humorous tales about colorful local characters. The result is pedestrian prose and humor on a kindergarten level. Feeling I should say at least one good thing (lord knows why), I liked the cover.

For those who haven't heard of the big to-do, when this book was self-published (who else would want it) it caused a loud roar in the library world. The woman took local eccentrics she knew via her library job and devoted a chapter to each of them, very thinly disguising them by changing their names.

Talk about defamation of character, for one thing. Then, lack of taste. Compound that with poorly written, unfunny prose and you have what this book amounts to.

I'm all for telling funny stories about local eccentrics, but for God's sake don't just change their names, and don't write it as NONFICTION. Better yet, don't write it at all if you don't have any clear talent for prose writing. There are other ways to write about local eccentrics. Combine multiple eccentrics into one person, throwing in a few things that aren't true about a particular person. Then, flesh out the characters even more, GIVE THEM DEPTH. And for God's sake don't just write chapters with each local eccentric's name as the heading.

How insulting to the profession this is. It's in poor, poor taste. I was able to get through only three of the chapters thinking, well, maybe this gets better. But oh no, it doesn't. It's mean spirit disguised as jolly laughter. It's laughing at people with problems, rather than attempting to understand. She judges people based on their behavior in the library. Did she know what made them the people they were, that they seemed to be? Ever hear of EMPATHY?

I'm just irate, so I'll end the rant here. I'm frustrated and angry someone wrote such a mean book, someone in my own profession. I wish it weren't on our library shelves. Unfortunately it is. Free speech sometimes feels as though it backfires. This is a prime example. But even the ignorant have a right to speak.

4 thoughts on “If you can’t say something nice …”