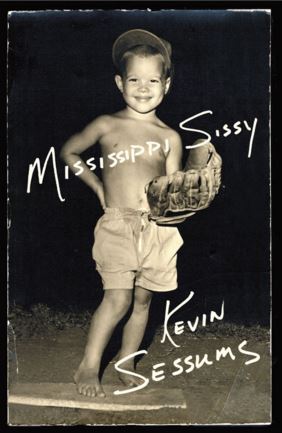 Kevin Sessums’s memoir Mississippi Sissy was one of an armload of review books the Holtzbrinck group sent me recently. In that pile of general and genre fiction, this one leapt out at me immediately. Not only was it the only work of nonfiction in the box, but it’s not everyday you see a title with Mississippi in the title, much less one with as engaging a word as “sissy” to go with it. It gets the attention, it really does.

Just a catchy title isn’t enough, of course, if the book itself doesn’t engage.  In this case the style engaged me immediately, and the authentic Mississippi voice was one I could identify with, coming from that state myself.

Sessum’s book tells the story of growing up gay in 1960s Mississippi. It may take a moment for the immensity of that to hit home, but considering this is KKK territory you may rest assured this was one rough ride. Mississippi isn’t exactly a state noted for being liberal, nor especially tolerant of anyone the slightest bit “different.” It was a rough ride made worse by Sessum’s uber-macho father, whose disappointment with his son played a major role in his growing up. Imagine being everything your father despises, yet wanting so badly to be a good son and make him proud. The difficulty of his childhood is painful and poignant, and Sessum reacts by shutting down his emotions, in an attempt not to embarrass his father further.

In contrast, his mother thought his cross-dressing cute and funny, at least until her husband began reacting more violently. If Sessum’s father hadn’t been killed in a car accident the violence and anger would surely have escalated.

Closely following his father’s death his mother also died from cancer, leaving the boy orphaned from a young age. With his mother Kevin had enjoyed a much closer relationship. She gave him the feeling of being loved and wanted, and there was also a certain playful camaraderie between them. They shared secrets, as well as private jokes. Her death left Kevin adrift, disconnected from his immediate family.

Mississippi Sissy is a courageous, warm, and often poignant memoir of what it is to be different from the mainstream in an unforgiving environment. It’s also a testament to Kevin Sessum’s spirit that he was able to weather it all and go on to become a writer known for his celebrity interviews. He’s an interviewer celebrities seem to trust implicitly, and there’s a quality to his writing in his memoir that may give the reader a good idea why that is. He has a genuineness, as well as an unforced honesty, that lends an especially compelling quality to his writing. I’d recommend Mississippi Sissy without hesitation as a truly well-written memoir.

I have not set a reading goal of any sort in YEARS, so perhaps my March 2021 stack is overkill.