I didn’t realize I had so much home-grown in me before. I saw traces of it pop up occasionally, most notably when I’m able to flawlessly imitate the southern accent (no, don’t ask me to do it, inspiration must strike me first). The fact is, I’m starting to gravitate a little toward Appalachia. Not literally or anything, but in the sense I’ve recently booked two programs here at my library based or inspired at least partly by things Appalachian, awakening me to the fact I must have some sort of latent interest in this subject.

For those outside the U.S., you may not fully realize what Appalachia means. To people inside, you may not actually, either, to be fair. Generally, when  you mention Appalachia one pictures the garden variety of hillbilly, people with bad (or no) teeth swinging off porches built on houses that sit precariously on the sides of wooded hills. Generally these people are connected with home-brewed alcohol, and the picture’s completed when you add a whole-grain “still” to the mix.

If you’ve been in the Smoky Moutains area you’ll have seen the cabins/shacks I’m talking about, but even if you haven’t I’ll bet it’s not hard to picture huge, overall-clad families sitting on shaky, wooden porches blowing into empty jugs to make music. While that’s really neat and all, I also think we shouldn’t get too blinded by the stereotype. And I don’t just say that because my paternal family line filtered through Appalachia, specifically the Carolinas. I may not be quite as personally fired up to stress the need to balance otherwise, but even without that I’d like to think the culture would still interest me. 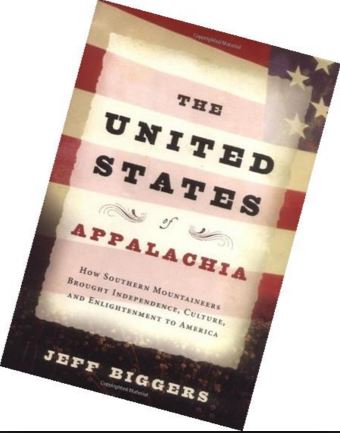 I’ve recently  booked author Jeff Biggers to come speak at our library. Jeff wrote a book titled United States of Appalachia: How Southern Mountaineers Brought Independence, Culture and Enlightenment to America. The man has a string of credentials about as long as my arm, but what probably sealed the deal was the fact he’s been an NPR (National Public Radio) commentator. The quality coming out of NPR is just huge, so there’s no doubt in my mind Mr. Biggers will be a stellar speaker.

On his website there’s information on the book he’s coming here to talk about specifically, In the Sierra Madre (Mexico’s Copper Canyon). While here he’ll talk about travel writing, as well, and other matters he knows an awful lot about. While this is pretty far away from the subject of Appalachia, his other book lands him squarely in that realm.
The other Appalachian-related/inspired program I booked will happen in May. This one centers on the music of that region and will feature video accompaniment and clog dancing.

Yes, clog dancing. In the Chicago suburbs. Won’t you be sorry you missed
that.

We’ll be a-hootin’ and a-hollerin’ that day, at least as much as one does so in a library setting. And, if you’re wondering, I will bring my camera. so keep on the lookout.

9 thoughts on “Bluestalking Reader: The Folksy, Home-spun Side”