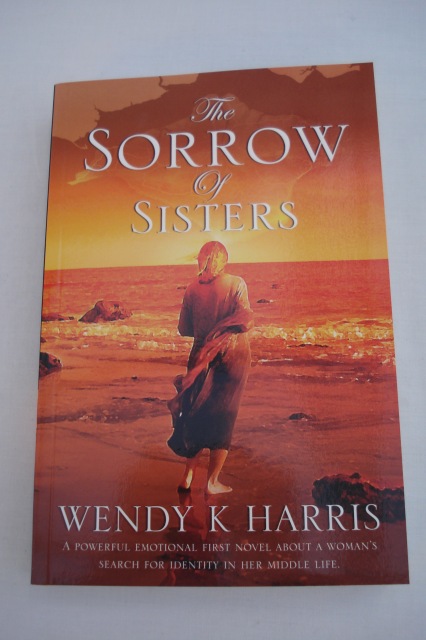 From The Sorrow of Sisters by Wendy K. Harris:

” I was born here – the phrase kept repeating itself in my mind.  I felt friendly towards it, an old-fashioned town, a hotchpotch of preserved Victorian grandeur, some renovation needed – some demolition even.  There was a hut on the beach selling today’s catch of crabs and lobsters, a digger further along heaving boulders for a small harbour.  It had none of the chic of the Mediterranean resorts which I favoured, but there was something comforting about it, like putting on saggy tracksuit bottoms and slippers after a day spent in a tight skirt and high heels.  … It might have been nice to grow up at the seaside. But then my life would have taken a different course.”

The books I choose in the cooler months don’t always tend to be any different in genre or “weight” than those I choose in the warmer months, but it seems particularly satisfying, once there’s a bit of bite in the air, to curl up with a nice, densely plotted saga sort of novel you can completely sink into.  The Sorrow of Sisters is precisely this sort of book.

Harris’s book features lush, sensual language that seems to evoke the Isle of Wight very clearly. Not having been to the island personally, I feel I can now imagine what it must be like to visit there. The imagery in this book was so vibrant and real I found myself caught up in the sights, sounds and even smells of the island, as illustrated by the many passages like the one featured above.

The book begins with a series fragmentary scenes. Before you know all the characters and have them straight in your head scenes come at you in what almost seems a random order.  The feeling is a bit disconcerting at first, but it doesn’t take long before things come into much sharper focus. It’s at this point the book really takes off, moving forward in a smooth, if not completely linear fashion.  It’s also at this point you begin to realize more about what was happening earlier in the book. I went back to re-read a few passages, to get things straight in my head, and I believe that really paid off as far as my continued enjoyment of the book.

Flashbacks are used in the story to great effect, allowing the reader to get the background history on the characters and the story while at the same time hurtling forward with the characters.  This adds to the rich, multi-layered quality of the book.  Without the backstory the novel itself wouldn’t be nearly as compelling as it is, and the method Harris employs is completely inspired. This works so well I can’t imagine a better way of approaching the writing of this book.

The plot of the novel concerns the lives three women, 49-year old Jane, a married woman with no children who’s occupied in nursing her dying father; Lillian, who has passed away by the time the main plot begins, but whose deeply intimate relationship with Emmeline is key to the book; and Emmeline herself, who survives to relate the whole tale to Jane.

Lillian and Emmeline are native to the Isle of Wight, and their sections take place there. It’s only when Jane receives notice she’s inherited a cottage on the island that she ventures there herself, and from that point on revelations about her past begin slowly unwinding as she learns more about her own ties to this land.

Surrounding these women are the men in their lives, 85-year old Henry, who’s Jane’s father and also the brother of Emmeline; Chas, who’s married to Jane; and, finally, Neptune and Woody, homosexual partners ostracized from the island community, a situation that leads them to withdraw somewhat from the world, becoming very close to Lillian and Emmeline. Neptune and Woody enjoy comfort and friendship with these two women they can’t find anywhere else, and as a result a very closely-knit friendship develops.

The many twists and turns of plot are extremely satisfying, but the fact is revealing too much about them reveals too much about the book, as well, potentially spoiling the plot for those who’ve yet to read it.  The book really revolves around the revelations Emmeline gives to Jane, both about the truth of her own life and also the truth of Jane’s. Each revelation digs deeper and deeper, until ultimately Jane is sent reeling, having to decide whether she’s strong enough to commit to helping Emmeline or if her loyalty to her father is greater. Her decision reflects her great strength of character, even in the face of some very difficult truths.

The ending of the book is as tumultuous as you would expect, given the kinetic, dynamic nature of the tale. This book reminds me of a cross between Wuthering Heights and the fiction of Sarah Waters. It has all the intensity of Bronte’s work, coupled with the gorgeous prose and deep humanism of Sarah Waters.

This is a highly emotional book, fraught with both the best and worst of humanity.  By turns it crushes and then redeems, ultimately finding light and hope, after the storm has cleared.