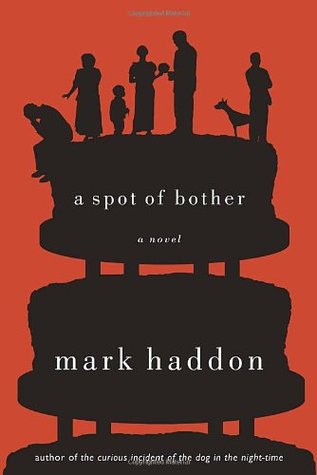 If he were given the choice he would rather someone had broken his leg. You did not have to explain what was wrong with a broken leg.  Nor were you expected to mend it by force of will.

– A Spot of Bother

What he felt mostly was a relentless, grinding dread which rumbled and thundered and made the world dark, like those spaceships in science-fiction films whose battle-scorched fuselages slid onto the screen and kept on sliding onto the screen because they were, in fact, several thousand times larger than you expected when all you could see was the nose cone.

The idea of genuinely having cancer was beginning to seem almost a relief, the idea of going into hospital, having tubes put into his arm, being told what to do by doctors and nurses, no longer having to grapple with the problem of getting through the next five minutes.”

Mark Haddon’s follow up novel to the curious incident of the dog in the night-time is another sort of exploration into the darker, more obscure regions of the human mind.  Instead of an adolescent main character with Asperger’s Syndrome, in A Spot of Bother Haddon portrays a 61-year old who begins to think he’s losing his mind shortly after finding a mysterious skin lesion on his hip.

George Hall is convinced he has cancer, and that there’s nothing that can be done for  him. He’s plunged into a dark, confusing sort of despair in which the world seems to wobble on its axis, throwing life as he knew it into an alternate nightmarish dimension.  Fear overtakes him, often crippling him, and he begins having panic attacks he believes are a further proof of the cancer he’s convinced himself is ravaging him.

Meanwhile, his daughter is planning her second marriage to a man he and his wife disapprove of. His wife is having an affair with a former colleague of his, and his homosexual son lurks like an unsolved problem in the background.

Mark Haddon’s second novel is stellar. It’s at times riotously funny, deeply empathetic and peopled with characters the reader comes to identify with so closely it’s not surprising to find yourself actually worrying about them.  Well, at least I hope it’s not surprising to find yourself worrying about fictional characters!  Perhaps I’ve just hit on fodder for Mark Haddon’s third novel, devoted to the notion that readers can actually come to care so much for fictional characters they build a delusional world around them.

A Spot of Bother is a book not to be missed.  Thanks so much to Doubleday for sending me a review copy of this book.