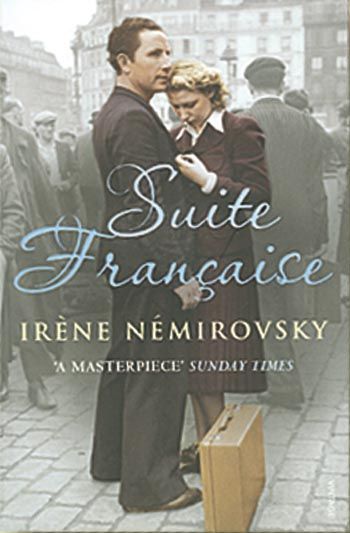 The story behind the publication of Suite Française is exceptional.  Author Irene Nemirovsky was a Jewish woman living in France at the time of World War II.  Already a respected author, she had a premonition the end was near.  As the Nazis marched into France, and the French rolled over for them, she knew her days were numbered. But still she worked, writing for hours everyday, sometimes cycling for miles to find the perfect isolated spot in which to work on her novel.

As it turned out, she was right to feel paranoid. The knock on her door did come, and she was taken to Auschwitz, where she died of disease just a month later.

The manuscript of Suite Française wasn’t published until 60 years following Nemirovsky’s death.  In the possession of one of her daughters, it wasn’t delivered to publishers until the woman became an editor at a publishing house.

Even without the back story, the book is beautiful.  It captures the time of World War II in France in such vivid detail it’s like a film rather than a novel. Everything from fear to greed to patriotism is represented, from the time the war begins to its end.  Bombs drop on railroad depots, people are killed and mangled, and mothers desperately run with their children in an attempt to get away from the carnage to find safety.  Food becomes so scarce people do violence to each other in order to get what scraps they can.  Perhaps most disturbingly of all, a group of orphans loses all grip on humanity, murdering and stealing with what can only be described as a manic glee.  Suite Française is a microcosm of the war from the perspective of those who lived it.

From France to Ireland, the late John McGahern wrote incredibly poetic and beautiful novels set in his native country.  The Barracks is about a middle-aged woman named Elizabeth Reegan who marries a widowed man with three children.  A frustrated police officer with dreams of buying his own farm, and fulfilling the legacy of the Reegans, her husband is a man all but oblivious to Elizabeth and her needs.  Already a widower, when he learns Elizabeth has breast cancer he can hardly bring himself to face the reality.  When his first wife died his only thought was what a horror it was seeing her in the morgue.  Any feelings of love or support are simply beyond him, leaving Elizabeth to deal with mortality on her own.

As she worsens, declining into death, Elizabeth is able to observe the family as an outsider.  Already all but a ghost, she watches them go about their daily tasks while inside she’s screaming with frustration, hoping for any bit of attention or kindness she doesn’t dare ask for.

The Barracks is a heartbreaking novel. McGahern gets inside the head of Elizabeth, expressing her plight with such empathy it’s staggering.  The prose is poetic and lyrical.  I would even say it’s flawless, and as perfect a work of fiction as I’ve ever read.

What a loss to literature, and to humanity, when McGahern died earlier this year, leaving behind him an award-winning body of fiction. There simply aren’t enough contemporary writers out there like McGahern, more’s the pity, but that’s what made him stand out like a shining light while he was alive.  Better to have written like an angel and then been lost than never to have written like an angel at all.